John  has been in the motorcycle repair business for over 40 years. He's a factory trained Harley-Davidson and Yamaha mechanic.  His specialties include H-D's, Vintage/Antique, British (Vintage), and diagnosing electrical issues.

Dain has trained under John for the past 18 years. Following in the steps of his father at an early age, it was always clear that Dain aspired to be an integral part of the family business. His specialties include sport bikes and 2-strokes.

Rachel handles everything from invoicing to social media/marketing. Her specialties include keeping
paperwork away from the guys (they're allergic)  and budget management.

​TECHNICIAN
Griffin is the new guy on the block here at Mobile Cycle Works! His eagerness to learn and natural mechanical aptitude have us excited to watch his skill set continue to grow.

​HEAD OF SECURITY
Willow is our official front door greeter gal. Often found napping in sunny spots throughout the shop, she's yet to meet a customer who hasn't quickly become a friend.

Here at Mobile Cycle Works, Inc., we believe in providing customers with not just good service, but fair and honest service.  We thrive on repeat business, a statement that demonstrates both our mechanical abilities as well as our high standards of customer service. We realize that our line of business is a service- and we refuse to offer anything but the best service.

His self-taught skills landed him a job for Glenn Jordan Motorsports setting up bikes. His position was quickly promoted to a mechanic. John’s motorcycle background was to only be strengthened when he was certified by Harley-Davidson Motor Co., Inc. Service School in 1979. He continued his position at Glenn Jordan until 1988, when he decided to independently offer mechanical services to the public. He began his business that same year and decided to call it "Mobile Cycle Works, Inc.".

So, where did the name come from? One customer helped show John that transporting ones bike oftentimes caused more damage than what was wrong with it in the first place. The customer didn't have a way to bring his bike in- so he enlisted the help of a friend who had a van. Being that it was 1981, his friend's van had a couch in the back, leaving no room for the motorcycle. Together they decided to attach the bike to a 6 foot rope and drag the motorcycle to the repair shop with the rider guiding the bike. On a sharp turn, the rider fell off, unbeknownst to his friend driving the van.

When he arrived, they had caused over $5000 in unnecessary damage to the motorcycle. This made John realize that customers needed a safe way to transport the bikes to and from the repair shop. Thus, "Mobile Cycle Works, Inc." was born. He did mobile appointments on-site and also transported vehicles to and from his shop. The popularity for mobile appointments eventually died down and the demand for in-shop appointments grew. This made John decide that he needed to open a shop so that customers could come to him. Today, Mobile Cycle Works, Inc. is located in Ashley, Ohio where John and his family provide customers with service that reflects over 40 years experience.

With every family owned and operated business there is a story to its beginning. Here's ours. John Schumacher first began his passion and love for motorcycles at the young age of fifteen. His first bike was a 1967 Bridgestone 175cc that he purchased for only $280. John grew up in a small town that didn't have a motorcycle repair shop nearby. So, he did what he knew best- he worked on it himself..

So, where did the name come from? 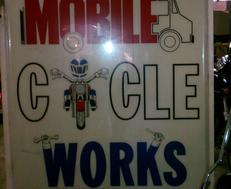